Perfecting the sound at the City of Grace Church in Arizona 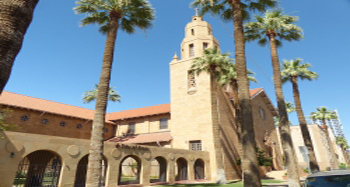 The d&b audiotechnik Ti10 loudspeaker system provided the ideal solution in terms of accuracy and throw, as well as aesthetics.

Orbital's Tom Byrne battled with 38-degree heat this summer during a high profile installation project in Arizona. The 1920s City of Grace Church was in need of a refit to bring its sound system up to date, with the d&b audiotechnik Ti10 loudspeaker system providing the ideal solution in terms of accuracy and throw, as well as aesthetics.

The City of Grace Church holds around 800 people and had a problem with amplified bands and live microphones on stage. The existing loudspeaker system covered the congregation, the walls and the ceiling with sound. Getting a clear message across was very hard work, as the listener was hearing the reverberant sound just as much as the direct sound. Added to this was the fact that the existing system was getting old and unreliable, so the decision was made to upgrade.

Tom gave us an insight into the installation:
"First and foremost, using d&b seemed the sensible choice, as the accuracy of the loudspeaker dispersion is spot on, meaning we could focus the loudspeakers to direct the sound only at the congregation. After some experimentation on d&b Array calc, we agreed that the d&b Ti10 loudspeaker (the installation version of the T10) was the obvious box to use. This small line array system gave us the accuracy and throw we needed, plus a major benefit was that the loudspeakers were colour-matched to the wood work in the building, making them less obtrusive.

"The installation took place in 38-degree heat with no air conditioning – for an unacclimatised British sales director, this was pretty hot! The local crew, however, seemed to take it in the stride and all seemed perfectly happy. We hung 8 x Ti10s and 1 x Ti SUBL&R over the stage. Once in place, you could hardly notice the 8ft tall hang in the air! With these two arrays, we covered a steep raked balcony and the main stalls seating. In addition, we used 2 x B4 (passive cardioid) Subs positioned left and right of the stage, with 4 x E5 loudspeakers as front fills (used to cover the first 3-4 rows of seating). The effect was immediately noticeable, once the installation was completed and all we had to do was a little balancing between tops and subs, a small amount of EQ and timing to focus the sound back to the stage in order to get the system sounding right. Everyone was very pleased with the result – including the aesthetics of the system, which has blended in really well with this beautiful house of worship."

The d&b audiotechnik Ti10 loudspeaker system provided the ideal solution in terms of accuracy and throw, as well as aesthetics.